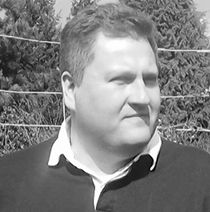 After completing his formal studies, Christopher worked for both the BBC and the Welsh National Opera before deciding to leave to further his freelance career. He was the founding conductor of the Richmond Chamber Orchestra and the first musical director of the Swansea Opera Workshop.Christopher has been commissioned to write for many diverse organisations and events including the Cardiff Festival of Music, Lower Machen Festival and the North Wales Music Festival and has had performances of his music by the orchestra of University College Cardiff; University Ensemble (Cardiff); Gemini Ensemble; National Youth Brass Band of Wales; National Youth Orchestra of Wales; Welsh College of Music & Drama Symphony Orchestra, West Glamorgan Youth Brass Band and the West Glamorgan Youth Orchestra.

Christopher was the first recipient of the Afan Thomas Composer’s Award and has also won the National Eisteddfod Composition Prize (Newport 1988) and was featured in the Welsh Arts Council’s ‘Young Welsh Composer Forum’ in 1987. In 1997, Christopher Painter was the first Welsh winner of the ‘Gregynog Composer Award of Wales’ which was given for his ‘Sonata for Harp’ which was premiered on June 28th at the 1997 Gregynog Festival by distinguished harpist, Elinor Bennett.

In October 1997 Christopher was appointed as Composer-in-Association with North Wales based Ensemble Cymru and wrote a number of works for this ensemble, including the children’s dance work, Yggdrasil, a Millennium Commission/Techniquest commission as part of the ‘Sounds for Science’ project. Christopher’s tenure with Ensemble Cymru came to an end in 2000 but he has maintained a keen interest in their activities and continues to write for them on a regular basis. His most recent work for them, Cad Goddeu, was premiered at the National Assembly for Wales in February 2003.

In December 2003, Christopher was awarded a Fellowship of the Royal Society of Arts.

In August 2005, Christopher won the prestigious ‘Tlws y Cerddor’ (Musicians Medal) at the National Eisteddfod of Wales for his chamber work, Yr Hanes Swynol (A History of Charms).

In January 2006 his ‘Forest of Dreams’ was premiered with great success by the Thueringen Phiharmonie, conducted by Alun Francis, and broadcast on German television.

He is currently working on a commission for a 40 minute orchestral work which will be premiered in 2010 in Mexico City by the Orquesta Filarmónica de la UNAM.

Christopher teaches composition at the Royal Welsh College of Music & Drama and is Secretary of the Welsh Music Guild.

His works are published by Maecenas Music, Oriana Publications and Vanderbeek & Imrie.

Christopher and his wife, Diana, live in Barry, with their two black labradors, Ceridwen and Megan, and their two cats, Emmy and Polly.